From the country of Chile in South America comes the Invunche. While most monsters inspire revulsion, this one is actually pretty sympathetic and depressing. The creation of these monsters begins with a witch, who steals an infant male baby. The witch then takes this baby to her cave (In Chilean folklore all witches have caves only accessible beneath lakes through underwater entrances.) Inside her lair, the witch will lay the kidnapped baby on a stone slab, then proceed to break one of its legs in many places and twist it over the baby’s back. The baby is completely awake during the entire process. Then the witch takes the other arms, feet, and hands, breaking them into disjointed unnatural positions. The witch then cuts a hole through the baby’s right shoulder blade and shoves the broken right arm through it. Giving the appearance of the arm is growing out of the baby’s back.

Needless to say, the whole thing is excruciating, to say the least. But it’s not over. She bends and deforms the baby’s head too. Usually by a stick or pieces of wood bound about the skull tightly. All these grotesque deformities make the child look monstrous. The whole process leaves the monster in a permanent state of agony. The witch continues the transformation into an  Invunche by rubbing a magical ointment on the baby. This causes thick hair to grow all across the infant’s body and allows it to grow past infancy despite its mangled form. The ritual is completed as the witch cuts the child’s tongue down the center with a knife. So it has a forked tongue like a snake. The infant is then fed the raw flesh of a human, thus making the magical transformation set in stone, and an Invunche is born.

For the rest of the monster’s life, its diet will be solely human flesh (though some versions say animal flesh too.) The witch will bring it victims to murder and devour. Though if pickings are slim the witch will just bring back flesh she hacks of victims she killed to feed the monster. The Invunche relies on the witch for food because its deformities make it impossible for it to leave the cave. It can’t swim. So the creature will spend its entire life in the cave. that is unless the witch uses her magic to assist it out.

The Invunche’s limited mobility doesn’t matter though. Because the whole reason a witch creates one is to have a personal guardian of her lair. They kill any intruders who come into the cave. Whether by accident or on purpose. Many unaware swimmers happen upon these caves, never to return, because an Invunche is really good at its job.

Upon noticing an intruder, the monster has an otherworldly blood-curdling scream that can freeze a person with fear permanently. Allowing the Invunche to slowly eat them alive. It’s not the most physically imposing monster, but its scream more than makes up for any physical lackings. The monster also has perfect eyesight in darkness and good hearing. Making it not the easiest to sneak up on. But if you can sneak up on it, there’s a trick to making it indifferent to you. By kissing an Invunche on its butt before it notices you, the monster for some reason won’t be hostile in any way.

The Invunche isn’t always alone either. Sometimes a witch will give the monster control over a lesser entity that will lure young girls into the water. This entity will abduct them and bring girls back to the Invunche. The monster will then drink the blood of the victim and feast on their flesh. 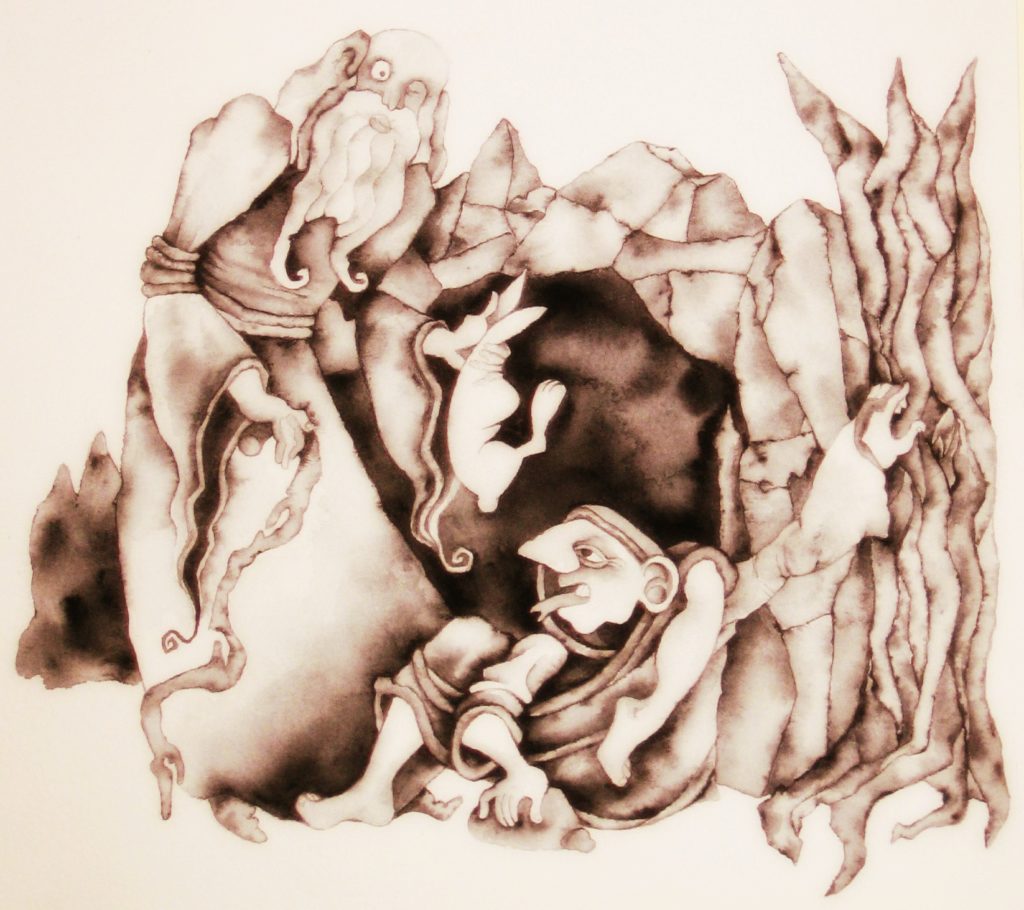