Caution this horror short story contains explicit content and is not suitable for all readers. It not only contains graphic horror but public execution. This story contains vulgar language and the aftermath of a horrific war. If you are under 18 or uninterested in horror stories then please don’t read Metalheads. To everyone else? Tell our new writer Faith Wilson how much you like her first story.

Adam sat alone upon the dirty pile of rags on the floor. “Fuck,” he thought, “fuck fuck fuck!” He frantically searched for his lighter, trying to light the first-morning cigarette. “Goddamnit! There’s no way I lost another lighter. It’s like they’re walking the fuck off.”

Adam was squatting in an abandoned office building in the “bad” side of town. After the war, his kind didn’t have anywhere else to go, really. If you got lucky enough to have someone take you in, feed you, even protect you, well you were fucking golden. Adam, on the other hand, was lucky to eat a few times a week. He got off of his makeshift bed and stretched. You could see rough patches of his past stretched across his arms careening down his malnourished body. The scars had an iridescence to them. They were almost opaque. Some you could watch the veins wiggle beneath. He’d grown fond of stroking those scars when he couldn’t sleep. 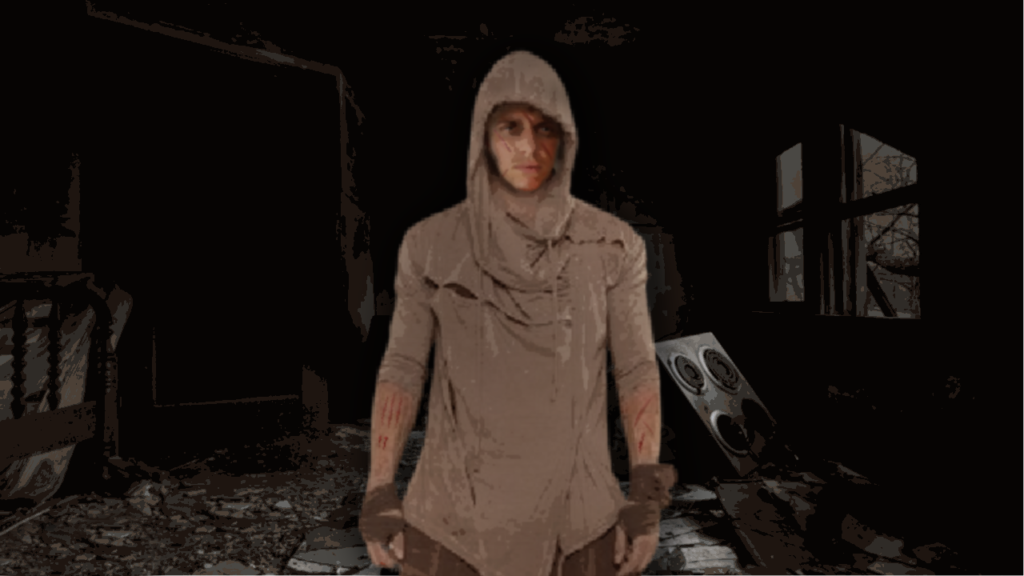 Need to rest so bad

With eyes clenching shut he drifted, losing himself in memories from a time long passed, the cascading images giving his broken mind a moment of respite…

Opening his eyes, Adam walked to the dusty window and looked out below. “Oh great, more of those damned metalheads.” He laughed to himself. “Metalheads” was such a funny concept. He imagined himself with his old tattoos and piercings. That was when being a metalhead meant something a lot less sinister. But, that was then, because right now he needed to find a way out for a lighter, and had priorities to consider. Adam lived for his cigarettes. He liked to think it was his only vice. Not that he had much of a choice. Even a “habit” was hard to come by in this new world. He began to make his way down into the basement of the building where he could watch the Metalheads from below. He could see their boots walking back and forth on the pavement. He could almost time their steps if he watched long enough. They were methodical in their movements. Almost perfect. Almost. 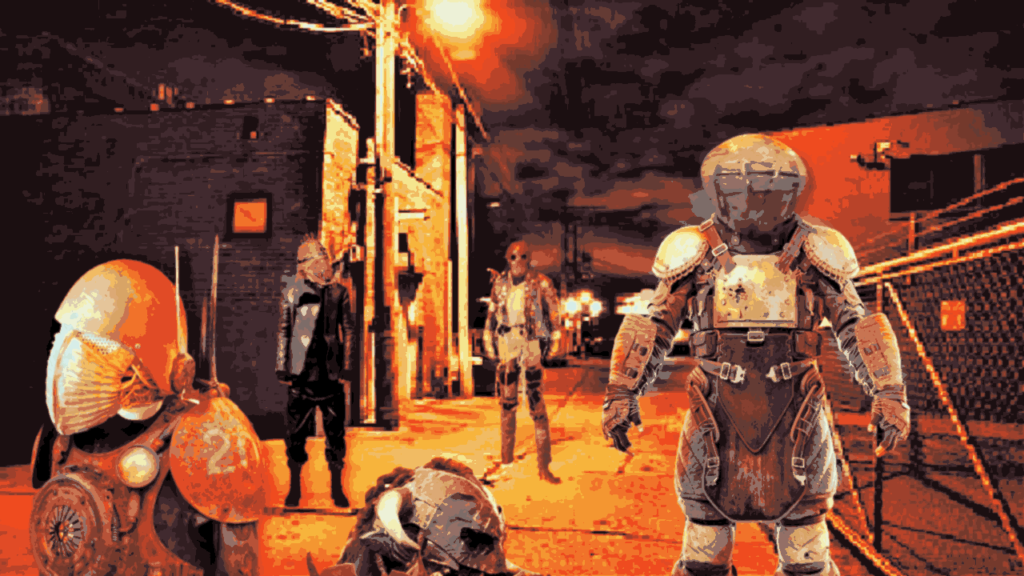 There had to be more around too. There were always more…

Before this, Adam was a pretty average guy. He had a minimum wage job. He had a knack for finding girls to fuck. He was proud of that. He also loved to party. He had a lot of friends. He loved his life. Who wouldn’t? He had it made. That is until Reverend Schefold suddenly popped into existence. One day, life was normal. Shit was good. Then, boom, all hell breaks loose. Reverend Schefold was about as charismatic as any human could possibly be. Even Adam admitted a few times that the guy made some fair points. He started off by making simple suggestions during his online sermons. “Pray for our brothers and sisters. Pray for our sons and daughters. This world is in disarray. We are the virus, and God is the cure!”

Adam wasn’t necessarily religious, but he did agree that humanity was a virus. The sermons began to get darker as months went on. “Satan has chosen his warriors. He chose them with a special mark on their skin. You can find them anywhere on our supposed brothers and sisters! My own father had the mark on his forearm after he served in Afghanistan! Don’t be fooled by the colors. Don’t be fooled by the stories behind them!” 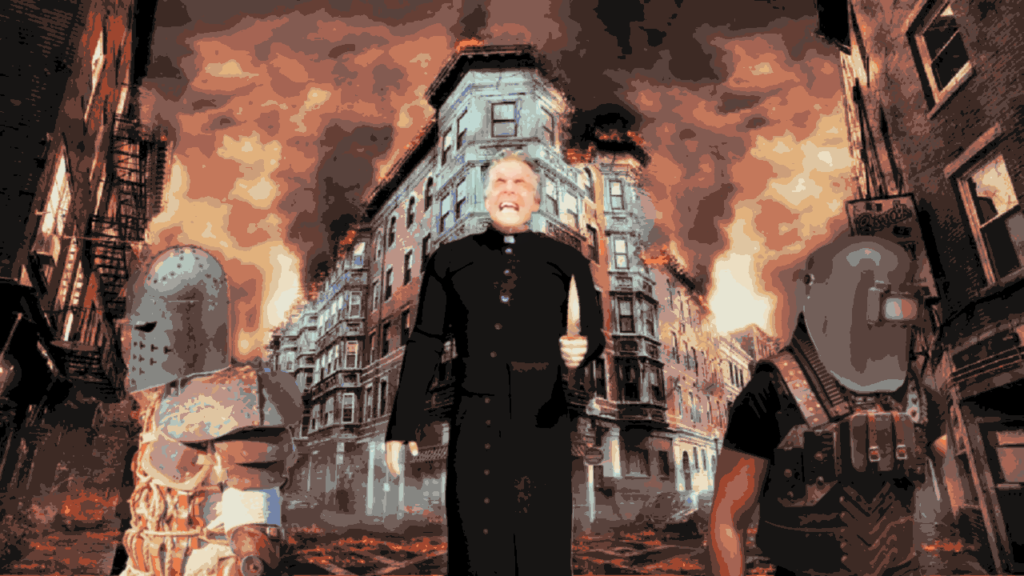 His charisma is the definition of hypnotization

The reverend’s followers had increased drastically over the course of a year. People were preaching his gospel in the streets. Most people laughed it off. Others would join in. Adam would joke with his friends “this shit feels like a cult, dude. Shit ain’t right.” he’d say half-joking. Well, he wasn’t wrong. The reverend’s tirades began to get violent. At a rally in Houston, he sliced the flesh off of a teenager’s forearm, a rose tattoo adorning the skin. “I shall take the mark of the devil, this mark of the BEAST, this covenant with Lucifer and make a monument to Christ our Lord and Savior!” the Reverend had roared in a bellowing cacophony. The entire congregation erupted with applause as this televised event started something that would soon get out of control. Religious extremists were soon grabbing random strangers and chastising them for making a covenant with the devil. Others were physically cutting tattoos from their own bodies as a sign to God of their allegiance. Celebrities were paying hundreds of thousands of dollars to remove their ink.

Adam found the whole thing hilarious. It was like something from a shitty movie. That is until it all descended into the stuff of nightmares. Reverend Schefold’s following only seemed to grow like a fungus on the rot of ignorance. The maliciously worded sermons became venomous with hatred. “Don’t deny thy God! Lest ye be in a pact with Lucifer! Uncover thy brethren’s sins so that he may live again!” At some point, it all became a blur. But the memories haunted him, the horror barely able to be suppressed for short durations. 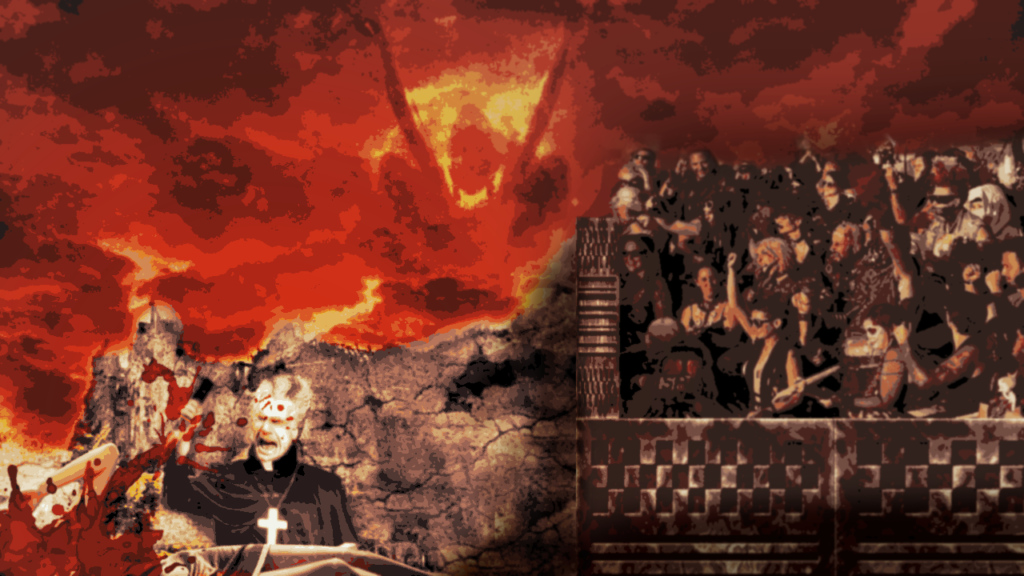 No one even tried to stop him, they all just cheered

During a televised rally in Alabama, Reverend Schefold undressed a young woman and dissected her body “sin by sin” in front of the entire world. “I shall remove the sins of her vanity” as he sliced away her scalp. “I shall remove the sin of her lust” as he sliced away the other sinful aspects across her sheath of flesh. “God forgive this whore for her sins!” Reverend Schefold cried. His cries were drowned by the young girl’s screams and the cheers from the massive congregation. The Reverend cut a slice of flesh and fed a piece of the girl to each member as a reminder of the taste of humanity. “Taste what temptation is to be a man under the sins of Satan! Taste what it is to be tainted with lust and vanity! She is now free in the eyes of our Lord! We must free our brethren of their sin! Rejoice in the eyes of God for he who follows Him does no wrong!”

Back to the task at hand.

Adam knew he had to get away from the madness make his escape. It was all planned out. The metalheads are about to switch shifts. They take off their metal helmets. Their faces glistening with sweat from exhaustion. It must be hard work being a warrior for God, Adam thought to himself. He knew it was his only chance. The metalheads exchange a brief update. He listens. His heart his pounding in his ears. If he gets caught this time, it’ll be his last. There’s a gas station that was shut down during the war. He’ll definitely find a lighter there. Probably some cigs, too. Fuck, maybe even a bag of jerky. Damn, sounds like Christmas. 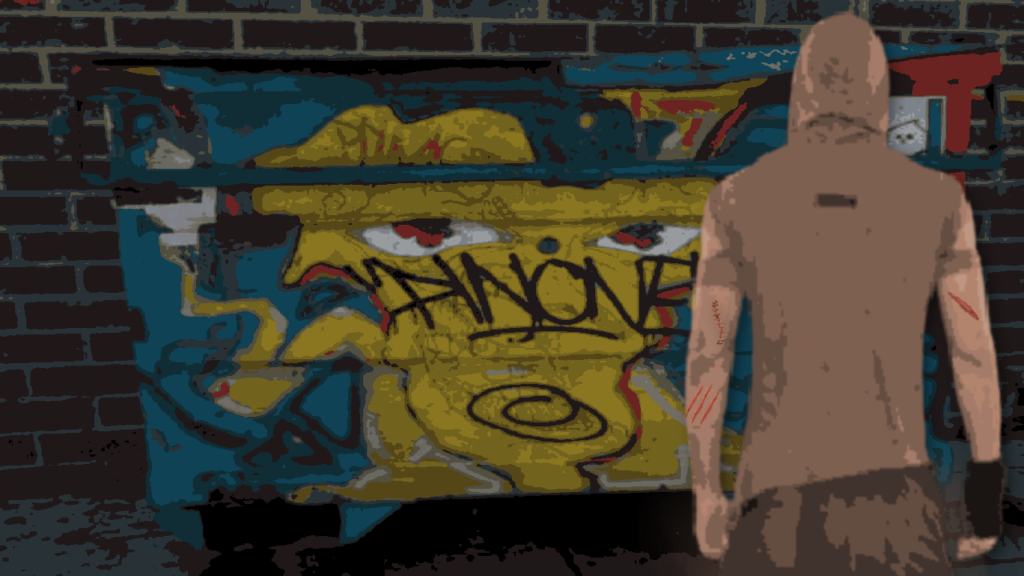 At last, the metalheads clear off to a different area, and Adam sneaks out of a garbage chute he’s used only once before. Instantly, he regrets his decision. Inside the dumpster is a mound of rotting flesh. Maggots roll in heaps from the craters of rot. He begins to heave and gag at the horrific miasma of putrescent stench. Involuntarily, he vomits all over the corpses. Trying to make his way out, something heavy prevents the lid from lifting. He pushes and pushes, and, with a loud clang of metal, he pushes the dumpster’s lid up. His clothing is caked in meat. Flies penetrate his mouth as he vomits onto the pavement. He runs. He runs with tears streaming down his face. He runs so hard that his body screams in pain. His lungs ache. His muscles spasm with usage. He isn’t going back to that building again. He can’t after what he went through. 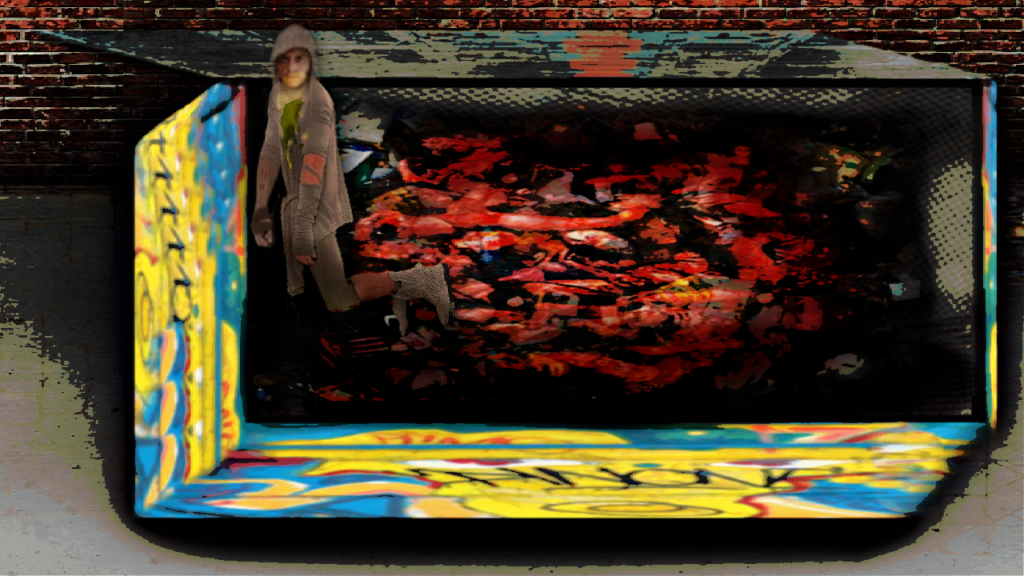 There was nothing left in my stomach…

Adam hastily made his way to the gas station, and finally, sensed freedom he hadn’t known in many months. Sitting down inside, he lights a Marlboro and inhales deeply, savoring every moment before letting it all out in an amorphous cloud. ‘Finally,’ was all he could think over and over. Adam wasn’t about to go for that cheap shit. Not after what he’s been through. 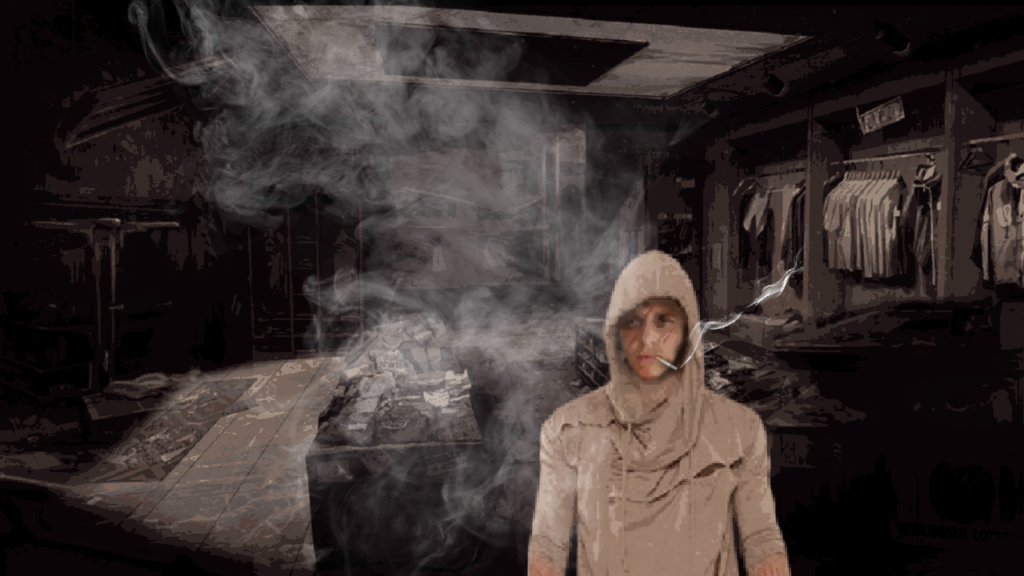 The best thing about life was always cigarettes

Taking drag after drag of the smoke, the taste of bile and death from his mouth started to fade, when suddenly he heard the clanging of metal. “Fuck. Fuck fuck fuck” he mutters as he desperately seeks a hiding place. “Fuck!” It doesn’t matter. He cut off his sins long ago. Slowly and painstakingly. Every mark of his covenant with Satan. He isn’t that guy anymore. He’s one of them. He’s a GOOD guy. He tries to convince himself. Every scar was a reminder that he went to war with himself. He beat Satan, didn’t he? He cut every inch of flesh marked with ink from his own body after the war was over. He didn’t want to be one of THEM, after all. He had longed to be on the good side of town. Maybe now was his chance. They’d see that he had repented. He was pure. The man with the metal helmet pulls Adam to the “Good” side of town. The men and women and children gather to watch. It’s been a while since they’ve tasted sin. Adam looks around at their plump, eager faces. Their cheeks are flush with hunger. The women eye his naked body with desire. The men began to pull out their knives preparing for the ceremony. Adam’s gaunt face and emaciated body mirror a different world. “They’ve tasted sin,” he says. “And they’ve liked it.” 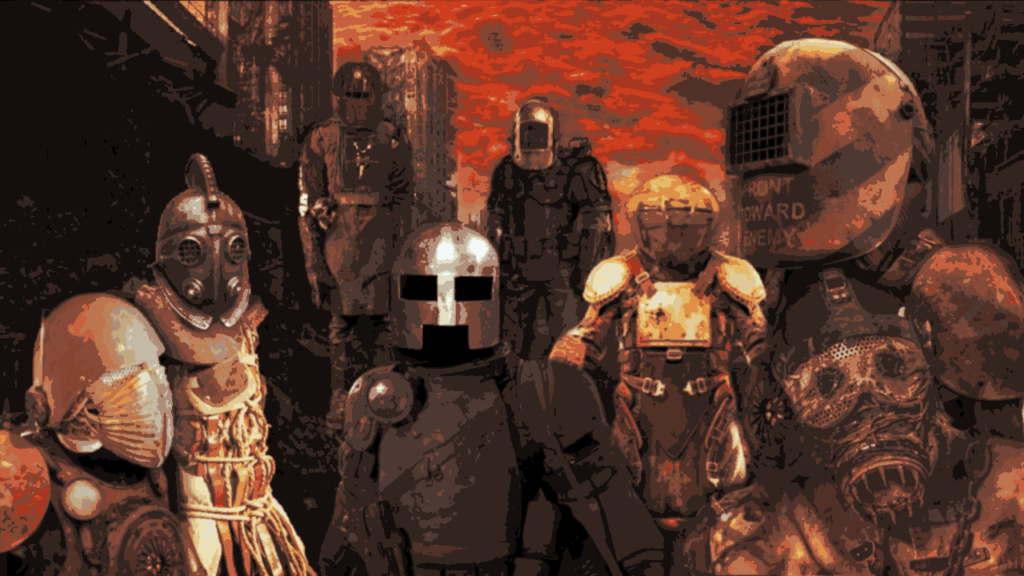 This is my sibling and she IS a great writer. She is creative and maybe she needs to work with the Buttonsverse

This was good. I look forward to the next installment. Have a nice day!