First off, obviously, trigger warning for demons, so if you’re creeped out by such stuff or don’t care for it, then time to back out now. Whether you’re religious, atheist, or whatever, no one’s making you read this but you.

Paimon, Paymon, Paimonia, or Bayemon, there are many names for this entity from demonology. King Paimon appears as a man upon a camel with a shining crown and an effeminate face. In fact, in one version, he’s described as having a woman’s face outright. He can appear horrific and decayed or appear as the most beautiful man anyone will ever see. And this entity is different depending on what information we’re looking at regarding him. 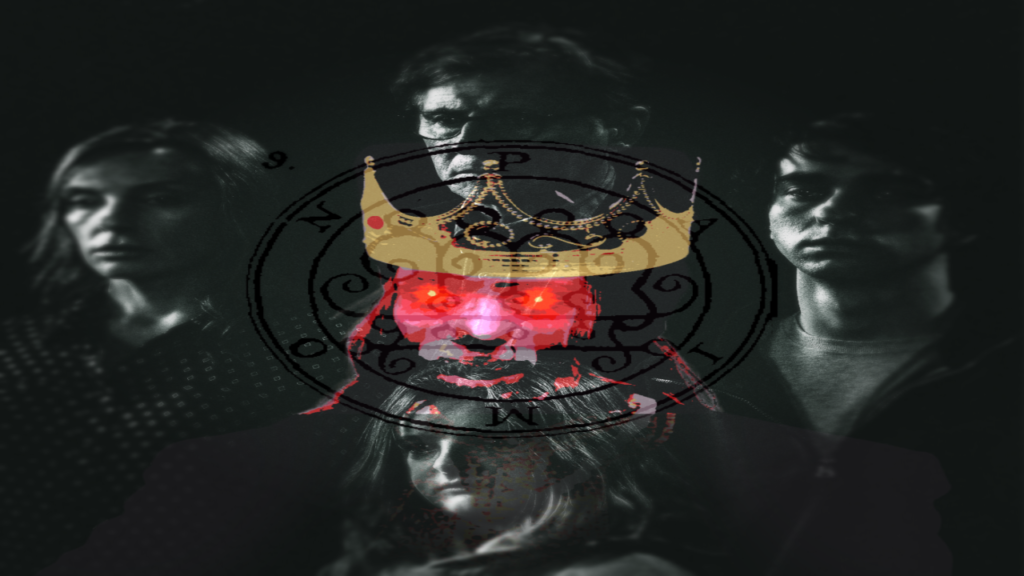 I’m assuming you’ve seen the ridiculously good horror movie Hereditary from 2018. And if that’s the case, you already know of this King of Hell because Paimon is the main antagonist and the sole focus of the cult surrounding the family throughout the film. However, funny enough, he’s actually not depicted accurately in Hereditary.

First off, in the film Hereditary, the entity is depicted as having a thing for decapitated heads. The little girl from the start of the movie is seen cutting off the heads of birds (who’s possessed but none of the family know it), to later her losing her head, and so on and so forth. Decapitation is a theme of the film. If you haven’t seen the movie, go check it out. However, in truth, there’s no lore backing Paimon having a thing for heads in any of the grimoires he’s depicted in. And suppose you’re wondering what a grimoire is. In that case, it’s a book of the accumulated knowledge of individual occultists. Still, it’s a book on how to summon entities from beyond into the material world in our context. King Paimon is within many such cryptic texts.

King Paimon is mostly well known from the Goetia, the 72 Demons of the Lesser Key of Solomon, published by notorious occultist Aleister Crowley. However, Crowley did not write it and only gave credit to a “Dead Hand” within his version. This “Dead Hand” that he’s referring to is Samuel Liddell MacGregor Mathers, one of three founding members of the Hermetic Order of the Golden Dawn, which was an occult secret society. The grimoire was just translated by Mathers, though, and is based on far older material. 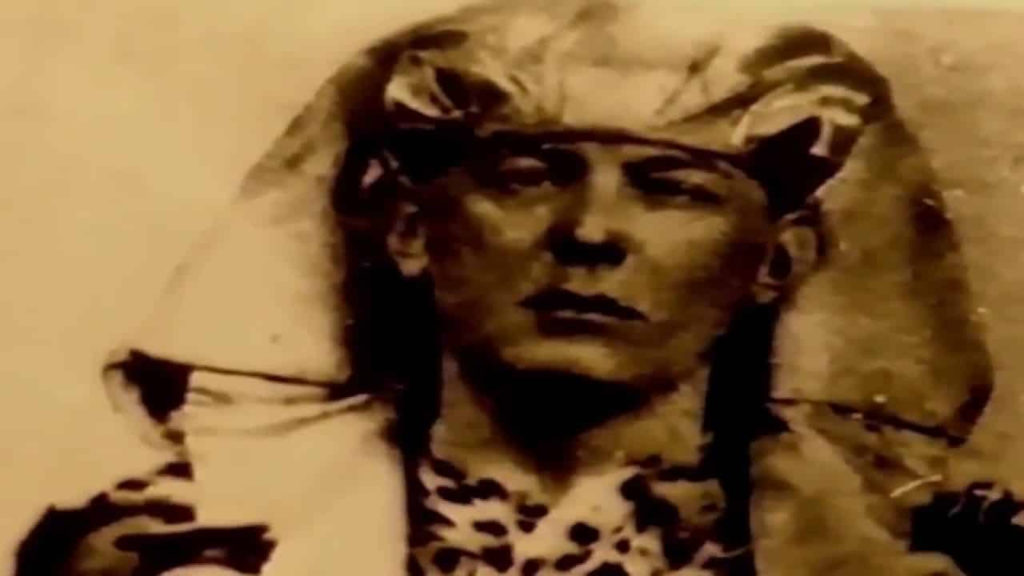 Many of the entities from these grimoires, especially the Goetia, can have their origins traced back to the gods of cultures from the ancient world. Since it was a common practice to demonize the gods of other civilizations to prop up one’s own, many of these beings are actually ancient deities. However, so much is lost to time, it’s hard to pin down many demons from the Goetia to their old equivalent. The majority of grimoires that have survived till modern times are from a Christian perspective out of necessity. The origin of such entities is far from orthodox, though, with most absorbed from djinn (genie) lore or Mesopotamian/Near East pantheons.

Some occultists have associated King Paimon with Isis and her equivalent in other cultures from the ancient world. However, all such conclusions (like all things) should be taken with a grain of salt. Paimon could be linked to many old gods he could originate from, but no link is provable empirically. All evidence to the origin of the deity has long since been destroyed or yet to be found through archaeology. Moreover, many cultures would find associating Isis with occult entities from grimoires to be extremely offensive. Yet, if there is ever solid evidence to back up the theory, then offense becomes irrelevant when concerning facts.

King Paimon is the ninth spirit in the Goetia, AKA, the Lesser Key of Solomon. 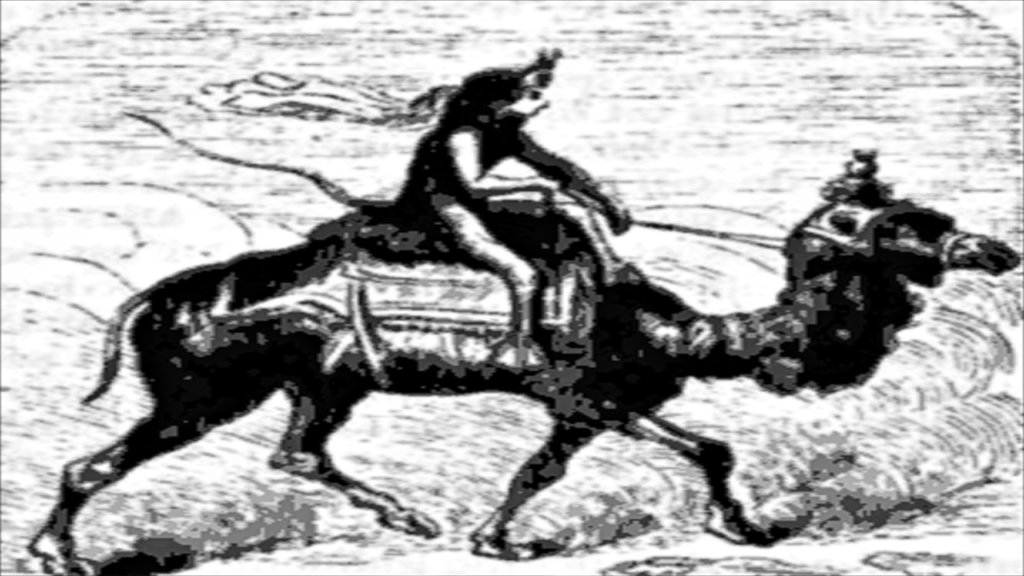 As depicted in the Goetia.

“Paimon.- The Ninth Spirit in this Order is Paimon, a Great King, and very obedient unto LUCIFER. He appeareth in the form of a Man sitting upon a Dromedary (camel) with a Crown most glorious upon his head. There goeth before him also a Host of Spirits, like Men with Trumpets and well sounding Cymbals, and all other sorts of Musical Instruments. He hath a great Voice, and roareth at his first coming, and his speech is such that the Magician cannot well understand unless he can compel him. This Spirit can teach all Arts and Sciences, and other secret things. He can discover unto thee what the Earth is, and what holdeth it up in the Waters; and what Mind is, and where it is; or any other thing thou mayest desire to know. He giveth Dignity, and confirmeth the same. He bindeth or maketh any man subject unto the Magician if he so desire it. He giveth good Familiars, and such as can teach all Arts. He is to be observed towards the West. He is of the Order of Dominations. He hath under him 200 Legions of Spirits, and part of them are of the Order of Angels, and the other part of Potentates. Now if thou callest this Spirit Paimon alone, thou must make him some offering; and there will attend him two Kings called LABAL and ABALI , and also other Spirits who be of the Order of Potentates in his Host, and 25 Legions. And those Spirits which be subject unto them are not always with them unless the Magician do compel them.”

This little tidbit from the Goetia says a lot about Paimon. The first thing I find interesting is how when he appears; it says he “hath a great voice.” From my research, this is a vast understatement. When Paimon appears, he has an otherworldly howl like a Banshee from Irish lore, though probably ten times more horrifying. This howl is said to break the unworthy who have summoned him. And he appears terrifying as well.

It doesn’t sound too good, does it? But from my research, this is essentially analogous to asking “whos there” through the door when someone you don’t know rings the doorbell at your home. Also, it clearly states that he can be compelled to talk normally, which also means he’ll take on a fairer form once established agreeably with the summoner. But he may also have other demons with him and Paimon is the commander of a great host! Two hundred legions of spirits! And some of these entities specifically NOT demons, while some are from the Order of Angels (demons) as well as other spiritual beings of Potentates. 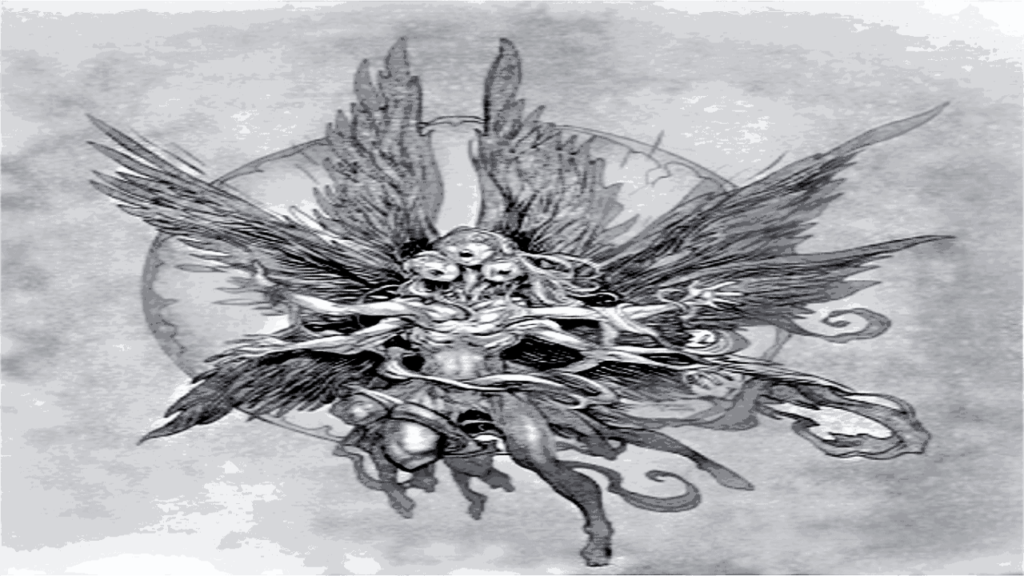 Angels are kind of cosmic horror and freaky looking when depicted accurately.

Fascinating stuff, but nothing obsessed with decapitated heads like he’s depicted in Hereditary. However, this is just one version of Paimon. The entity is also found in 14 other grimoires: Dictionnaire Infernal, Key of Solomon, The Grimoire of Pope Honorius, The Book of the Office of Spirits, Book of Incantations, The Book of Oberon, Clavis Inferni, Munich Manual of Demonic Magic, The Magical Calendar, The Book of Spirits, Pseudomonarchia Daemonum, The Book of Abramelin, and The Discoverie of Witchcraft.

So this King of hell gets around. However, Paimon isn’t in the mainstream Abrahamic religions. Though, he is also called Ozazl or Azazel from Rabbinic Demonology. Azazel being from an ancient Hebrew practice known as the Scape-Goat, and the entity that originated the goat-like demon imagery familiar in pop culture. But Azazel is also one of the Ben-Elohim from the Book of Enoch. One of the Watchers that gave humanity knowledge against the will of God. But, most Demonologists consider Azazel and Paimon separate entities entirely. 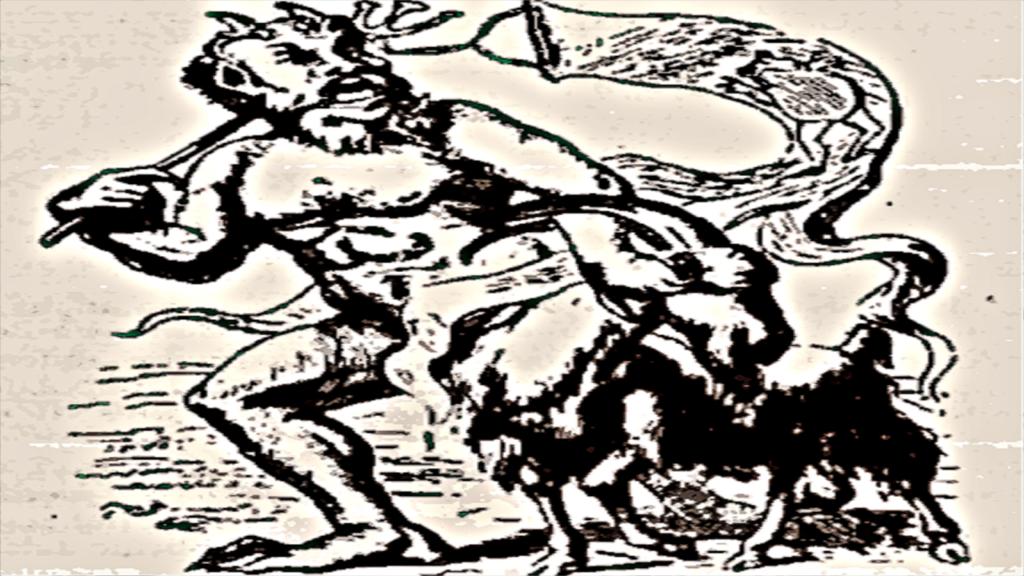 Azazel has many depictions including an angel.

It’s essential to keep in mind many of the grimoires contradict one another concerning King Paimon. So there is no end all be all definitions concerning this demon. Many actually consider Paimon a djinn (genie), which are supernatural entities from Arabian Mythology. And Paimon’s depictions kind of back this up. Yet still, that’s all up for debate. The only agreed-upon thing concerning Paimon is that he was initially a Mesopotamian god and most likely a female. But the connection to the djinn comes from some grimoires that don’t say he’s a King of Hell but a king of Jinnestan, with hell being a MUCH later addition.

“Jinnestan is the country of the djinn, or Fairy Land, the chief province of which is The Country of Delight, and the capital The City of Jewels. It is the realm of the jinn. This realm is divided into two parts, the Desert of Monsters (Badiat Coldare) and the Desert of Demons (Badiatealgim). Its capital city is known as Schadou Kiam. Also identified as Djinnestan, or Ginnistam.”

In the movie Hereditary, Paimon is said to grant wealth, but in the grimoires, the entity pretty much consistently only has a handful of things to offer. He gives knowledge of all Arts and Sciences, can reveal the nature of Reality and Mind, provides reputation, turns people to subservience or dependence to the occultist, and provides good familiars (meaning friends, helpers, or things of that sort, either human or spiritual). But all that doesn’t sound very demonic, though, does it? It seems more like a hardcore teacher not to be crossed than a demon. 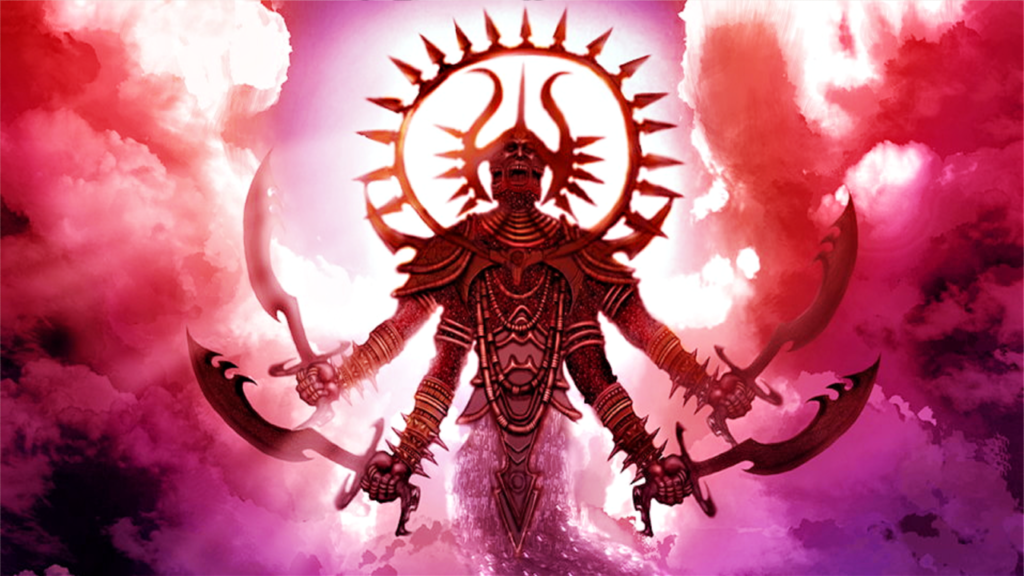 Djinn lore is deep and vast.

Paimon is full of energy and creates loud noises. He manifests directly before people visually, which is far from being a quiet insidious stalker of mortals with intent to possess them as he’s depicted in the movie. But what Hereditary got right is he makes many bright and colorful lights, which subtly signals Paimon’s presence in the film (you have to look for it, because the filmmakers did not make it obvious). However, unlike the movie, King Paimon is universally respectful and friendly if treated properly to his station, and won’t go out of his way to cause harm or hurt anyone unless the interaction is incorrectly applied. This doesn’t mean the entity isn’t incredibly dangerous though. It is always stated great caution must be taken with Paimon, but the angel Hasiel has the power to constrain him if things get out of hand. In any case, it is the summoner that is responsible for good or ill that befalls them concerning the conjuring of King Paimon.

Despite being a Hollywood movie, there are a couple of things Hereditary gets close to correct. The little swirly symbol for the entity is kinda accurate to the legitimate Sigil (Seal) of Paimon. The sigil is altered in the movie slightly and kinda makes it resemble 666, giving it even more of a demonic charm. King Paimon also has a lot to offer concerning knowledge as well as binding the will of others. The term granting good familiars is directly quoted in Hereditary by the cultists, which is one of the most direct similarities between the movie and reality. No decapitated head obsession to be found anywhere in any of the lore, though. 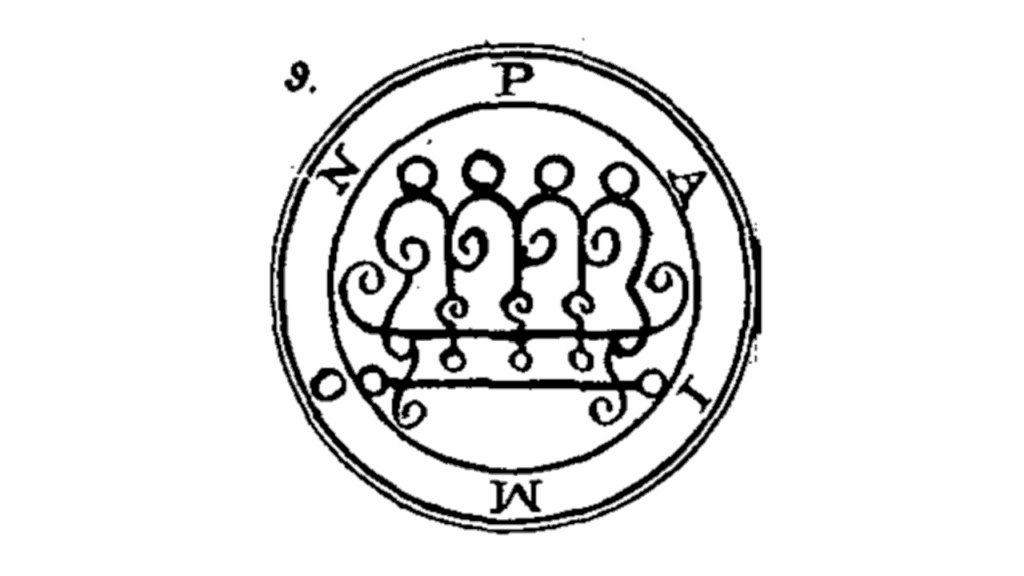 The sigil of King Paimon.

Do the other ones