DMT use among psychonauts is much deeper than it appears to someone from the outside, with no interest in exploring consciousness. Indeed, it is far more than just “getting high,” or something of the like ordinary people try to define the use of DMT as.

To utilize DMT in high degrees is to push one’s consciousness into something called “Hyperspace,” in which the person basically leaves their body and experiences an alternate existence far beyond the mundane material world. Visions outside the physical body even happen with one’s eyes closed and annihilate the accepted views of reality. 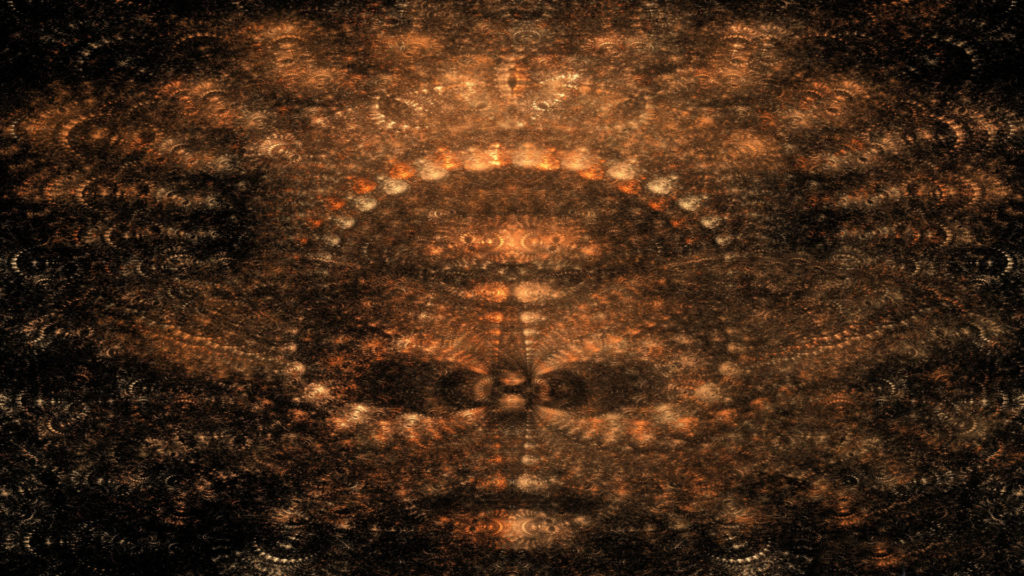 Life will never be the same after DMT.

DMT studies by psychonauts have over 35 years of research and have some “interesting” conclusions. Such as reoccurring entities people have encountered from DMT Hyperspace experiences. In fact, these alternative dimensions seem to be littered with them.

These entities are theorized to be culturally inspired in how they’re perceived. But within cultures, there are consistent themes. However, the overarching connection between all cultures is that these entities are autonomous with an individualistic will. No matter what cultural filter is being used, all psychonauts encounter these DMT entities in Hyperspace.

But what is “Hyperspace,” you may be wondering? Well, most think of it as another dimension or a level of awareness that is actually more in line with our true nature. It is made of light, energy, and without our mundane 3rd-dimensional world limitations—psychonauts taking high doses of DMT blasts them out of their physical body into Hyperspace. But people have also claimed to go there during near-death experiences, profound meditation, the practice of Yoga-Nidra, or even some accounts of lucid dreaming. Shamans who work with the DMT drink Ayahuasca believe Hyperspace is the afterlife. 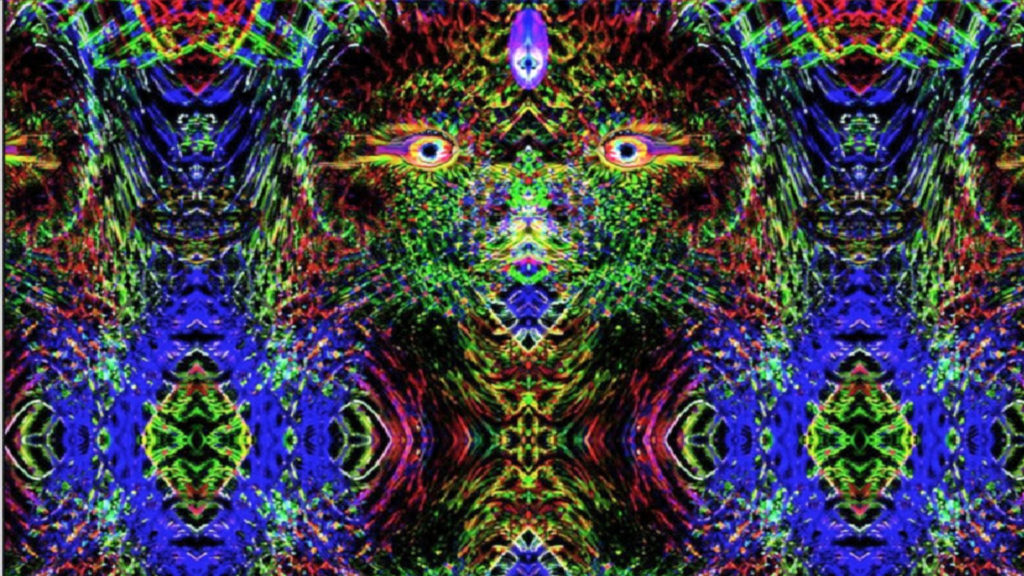 ALL DMT entities are frightening from a mundane perspective of reality. So the unwary or the unprepared should never take DMT in any of its many forms.

For the sake of staying focused and in line with the context of our topic, I will only cover a handful of consistently encountered entities, with a focus on Hyper-Spacial Beings. There are far too many DMT entities to cover at once, but I will continue their chronicling in future installments. 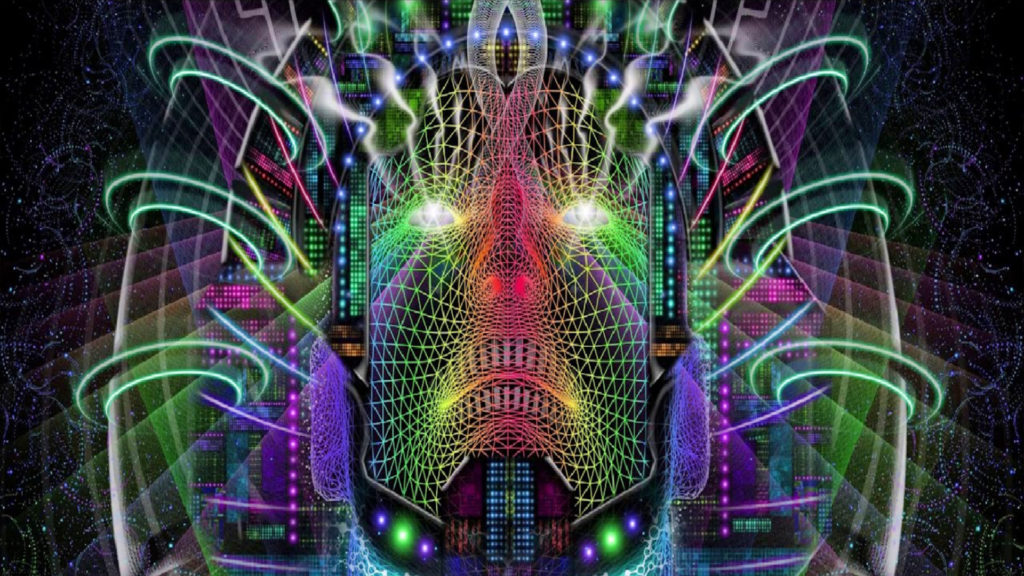 We’ll start with the Talking Heads. These entities are precisely what they sound like, though they are always encountered while traveling extremely fast and surrounded by psychedelic fractal hyperspace terrain. The entity usually appears human, but not always. And encounters with Talking Heads usually take the shape of a long and profound conversation. Revelations and epiphanies are the results of the meeting if the tripper can keep their head on straight.

The faces can be weird-looking, fractal, or even solid and ordinary. They never try to instill fear and are universally neutral in demeanor, though unnerving non-the-less to the timid and amateur psychonaut. The heads often somehow know the person better than they know themselves, and if engaged with can illuminate many hidden aspects of a psychonaut’s true nature. Some psychedelic hyperspace terrain has many talking heads at once. 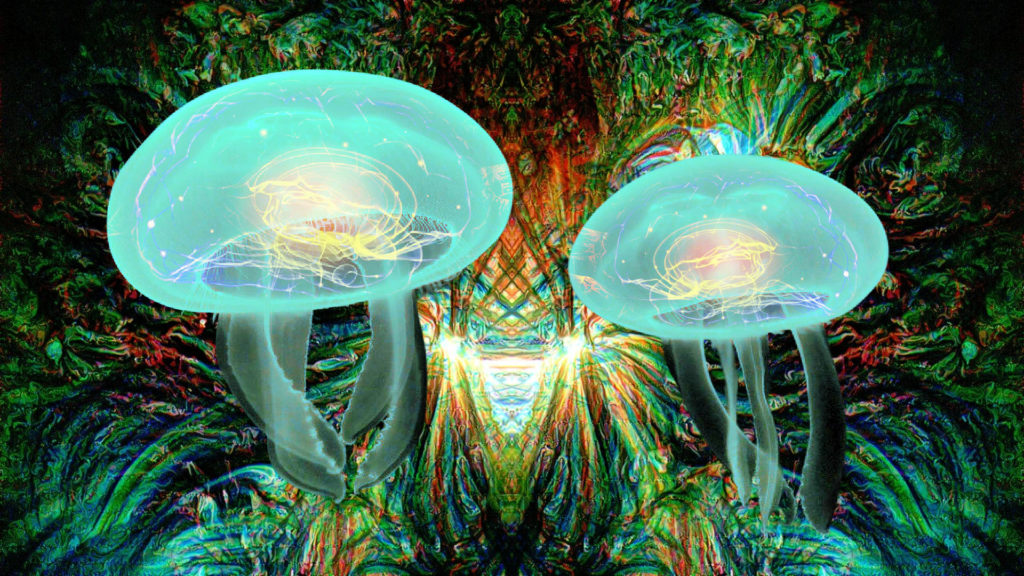 The Floating Blue Jellyfish are usually seen in groups. They have brains visible through translucent skin where their eyes should be and exude a purple-ish aura. The aura permeates a feeling of love, but not all have experienced it, and many who have were openly suspicious of it. Blue Jellyfish are not known to be hostile but can seem aggressive or annoyed in many cases because they are reported to get upset at psychonauts because they are not dead. They will frustratingly talk to people about it in a telepathic manner and converse in annoyance among themselves.

They’ll say things like “you’re lucky we don’t do anything” or “we’ll let you off this time,” which is kinda cryptically horrifying. They don’t speak English, but moreso a buzzing sound that can still be understood by the listener. Some say they eat the pain of the dying or something of the like, but no one really knows. If there were ever darker, more dangerous encounters with them, the victims didn’t survive to tell the tale. 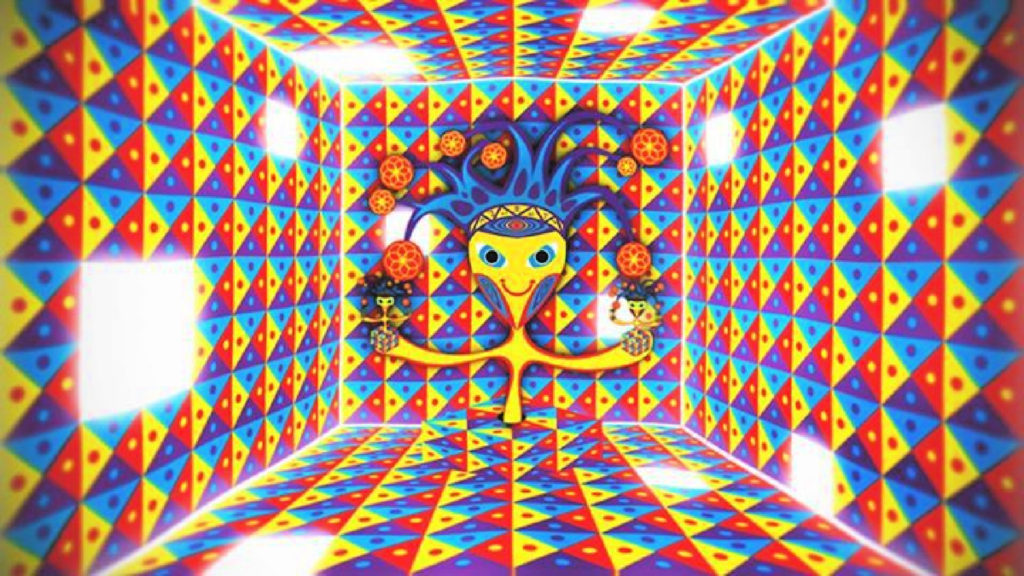 Jesters are the most well-known DMT entities. Many famous people have talked about seeing entities like these, including Joe Rogan. While a Jester can seem kinda creepy to many people, especially people with a fear of clowns, Jesters don’t really seem malevolent. Most of the time, the worst thing they’ll do to you is laughing at you or make fun of you. However, in rare accounts, they have been said to become sexually aggressive to women.

They are trickster entities that can be friendly to some while frightening to others. Those who think Jesters are not scary often feel like they’re “in on the joke” metaphorically. They enjoy surprising, tricking, or somehow causing awe in the viewer. The environment is like a psychedelic circus, and the entities often wield tarot cards or playing cards they love to show. It is wise to respect the Jesters’ performance, or things can get scary. 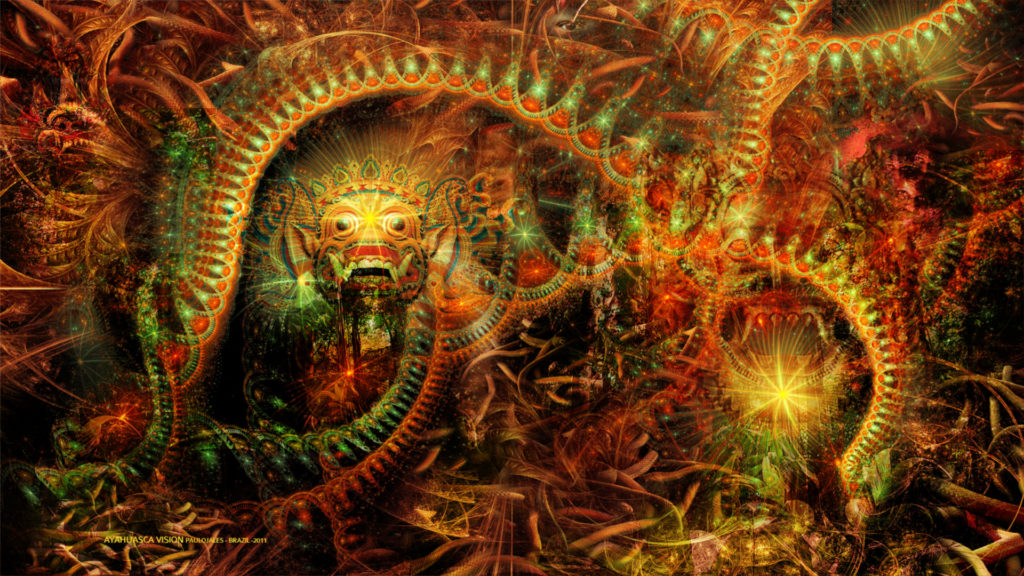 Serpents are often associated with the Ayahuasca experience of DMT. Still, there is no shortage of bizarre snake-like entities such as the Snake Pipes that seem to go on and on forever to the psychonaut. Encounters with entities such as these are hard to categorize. Yet, the Snake Pipes are reportedly benevolent and neutral at worst. However, these entities have frightened many people because they’ve reportedly completely enveloped psychonauts, then appear to be intent on swallowing them.

These types of DMT entities could also be linked to gods of ancient cultures, such as the Quetzecoatle serpent god of the Aztecs. And many of the snake-like entities and reptilian entities bless the psychonaut with incredible wisdom and secret knowledge. In fact, snakes are only seen in undesirable light within certain Western cultures. Snakes represent fertility, rebirth, healing, wisdom, and the creative life force. As such, transformation can (and often is) frightening. Snake Pipes and Serpent DMT entities are primordial and beyond limited human perception of good or bad. 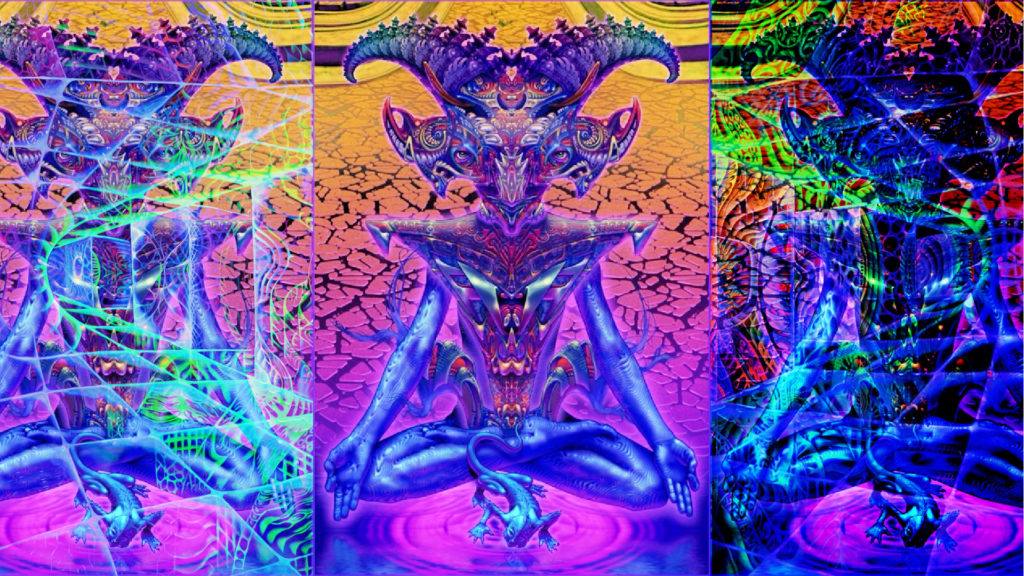 Elves are one of the most consistent DMT entities that have been encountered. Terence Mckenna coined the term Machine Elves, and they’re also known as Clockwork Elves. The interesting thing about Machine Elves is that many different DMT entities are considered to be Machine Elves by many psychonauts. They have incredibly diverse forms, and can even appear as sentient geometry. Some Machine Elves recognize the psychonaut and treat them with familiarity, which is intriguing and causes so many questions. They can be ornery on occasion but are primarily playful and greet the psychonaut with childlike innocence, like an old friend.

Some people claim they are the architects of the Universe and “keep the show running smoothly” quote on quote. Machine Elves try to teach or show many things, and the negative encounters with them only occur when the individual is unwilling to learn. But then again, this is based on the level of consciousness the psychonaut possesses, and what some consider “bad” is really just a misinterpretation. There are countless documented encounters with the Clockwork Elves, and they’ve supposedly revealed countless secrets of existence to ascended humans. 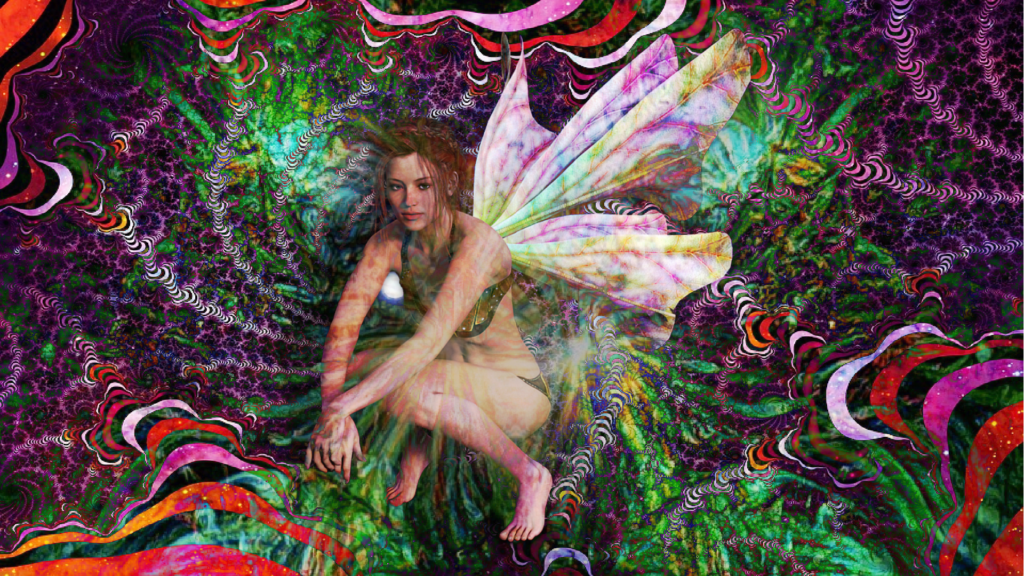 Often described as Flirty Fairies and indeed flirt or even strip for the psychonaut, whether male or female. Sexual orientation is irrelevant to the entities. They can be amorphous and ever-changing complete with wings as in folklore, or more abstract, but always easily categorized as fairies from fairy lore. These entities are an embodiment of beauty and joy. They are so excited to interact with the viewer it appears as they can hardly contain it in saying that their behavior is urgent with their body language mirroring this excitedly burlesque intensity. They are universally beautiful and often emanate with flashing light.

The overflowing sexual intensity of the Flirty Fairies is theorized not to be sexual at all, in a way we humans understand it. More so, their behavior is a metaphor for their abundantly loving and intimate nature. This DMT entity is in stark contrast to real-world fairy folklore because the fairy folk are known to be pretty dark tricksters that have caused a lot of chaos and sorrow in our world (supposedly). So, it’s fascinating they are said to be so universally benevolent and loving in Hyperspace. The Flirty Fairy almost universally leaves a positive impression on the psychonaut. 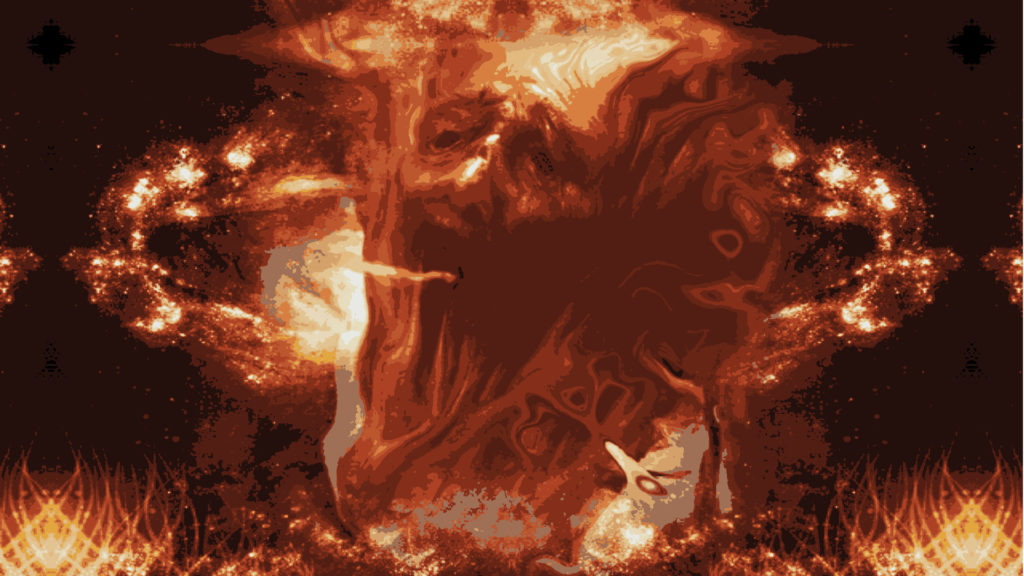 Frequently Dark Entities are stopped by other DMT entities, and some such intercessors have given off the vibe like a rule enforcer who blocks Dark Entities from doing what they want. But some occult psycho-spatial beings break through to the psychonaut anyway. However, these beings only come around if invited somehow, which unknown to the tripper can be negative emotions such as fear.

Many psychonauts refuse to categorize, label, or document information regarding these entities because they want to protect those who may accidentally draw their attention. Secrecy is necessary because Dark Entities can cause serious psychological harm resulting in mental illness. In any case, cultural origins seem to change how such entities appear. Be it demonic, cosmic horror, or just plain ineffable, the psychonaut community regularly refuses to comment on Dark Entities within Hyperspace.